The Battle of Chattanooga took place on 24-25 November 1863 and ended with the Union taking first Lookout Mountain and then Missionary Ridge to control the state of Tennessee. I chose the Star of Tennessee block to commorate the scene of some of the 82nd's most important action in the war after Chickamauga. 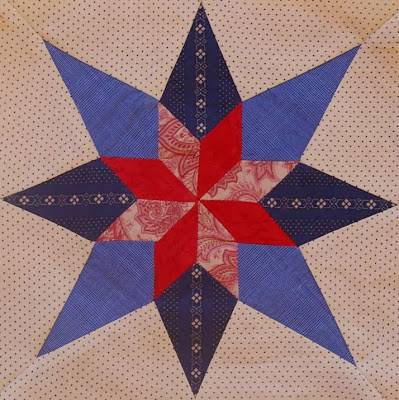 With 20 "y-seams", this is a block that most quilters would piece by hand, but I prefer machine piecing. It was the only block I've had to make twice. My first attempt used two red fabrics for the center star that were too similar, and I didn't have enough contrast between the background and a fabric for which I have now substituted the subtle plaid.  I don't want all that precise work to go unnoticed, so I changed the background fabric as well. This in an 8 inch block, like the Hunter's Star I chose outside the Dixie Diary series.

The 82nd Indiana, part of the Army of the Cumberland, did not see much action on November 24th, while Hooker's forces took Lookout Mountain. At around 3:00 p.m on the 25th, when Sherman's army to the north of their position stalled, Grant ordered some of Thomas' forces to take the rifle pits at the base of Missionary Ridge. The men did so, but upon reaching the pits found themselves under fire from above, so they kept going up the ridge. The units on the Northern end of the line got to the top first. The 82nd Indiana in the 1st Brigade had rougher terrain to get over, but they fought their way up the 200-400 foot incline in the charge on the Confederate center that ultimately resulted in the Union victory.

Billy wrote a letter to his brother and sister on December 2nd, saying he had not forgotten to answer their letter, he didn't have time to write. "I suppose you have heard by this time that the 82nd has been in one of the grandest charges of the war within the last week. Of course I was in the mess with the balance. I got a hole shot through my coat and haversack, which was as close as I want them to come to me. You had better believe the bullets come down the hill pretty fast but when we got on top and saw the Rebs running from us, we felt big. Our Co. lost but one man wounded and he is not mortally wounded.... We got 52 pieces of artillery on the ridge and enough in the valley and on Lookout Mt. to amount to 85 pieces. There were 7,000 prisoners sent away from here at one time. [That estimate is higher than post-war figures.] Small arms to the amount of about 10,000 stand. We followed the retreating enemy about 20 miles and the woods were strewn full of small arms and artillery - all the way."

I wonder where Billy's bugle or drum (he is listed as "musician" on the regiment's roster of enlisted men) was while he was running up that ridge.

Wikipedia has gathered illustrations and a map of the battle for Missionary Ridge you can see at http://en.wikipedia.org/wiki/Battle_of_Missionary_Ridge with a lengthy description of the action. Billy and John were in Turchin's brigade.

Determination! Not I!! Love the dark blue with the single stripe design.

What a great rendition of this block - your piecing is immaculate and the fabrics are well chosen. I particularly note the preciseness of the fussy cut blue plaid.

Please fill us in on the plan for this quilt - you are using the 12 Dixie diary blocks and adding to the project more blocks? Will those blocks be chosen because of their block names?