When we refurnished the living room, we moved the Asian rug that went with the old furniture to our bedroom.  Although the existing quilt's colors were not terrible with it, the patterns of quilt and rug together were too busy and incompatible.  In addition, the sun had taken its toll on the quilt's fabrics in one corner - they were fading and some were starting to shred.  I was not immediately inspired as to how I would replace it, but a local fiber-related flea market supplied a color-themed decorator fabric sample book in our brown and blue-green scheme.  I dismantled the book and was able to cut two 2.5 x 5 inch strips of each fabric which I pieced in a single stripe. 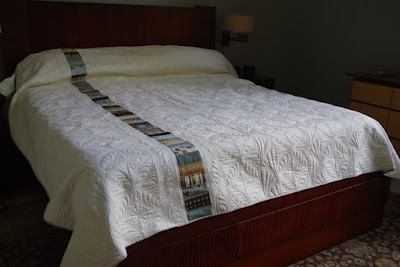 This obviously left a lot of area to be filled. Knowing this quilt is likely going to fall apart from sun exposure, I didn't really want to spend a lot of time on the problem, and decided to quilt rows of feather motifs.  Feathers fill a lot of space quickly - though the structure I put them in maybe isn't so fast. 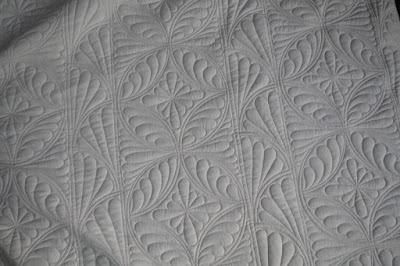 The 9.5 inch interlocking circles design is a composite of ideas from one of the longarm feathers tutorial books I learned from when I first started my quilting business.  The alternate design - a half-clam shell 3.75 inches across - came from a striped printed fabric I noted while fabric shopping on-line several years ago.

The decorator fabrics are of varying weights and textures - you can see a textured chenille under the leaf print in this next photo. 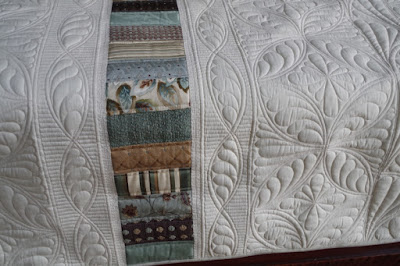 I hoped my design would not take weeks and weeks to finish, but it took longer than it should have.  I loaded the quilt with what is the left side first, so the stripes go the length of the longarm table.  I basted the top edge, then decided to nail the pieced strip with its varying weights and textures (including some devilish slippery fabrics) firmly in place making sure it was very straight before doing any other quilting.  I was thinking, "Oh, it's only the second full roll of the quilt, I don't really have to baste all that, do I?"  Well, I should have been checking as I worked my way back to the leading edge, because I quilted in about 2 inches of backing fabric as pleats - and since I was working backwards, I did not see it until I had quilted an entire row of circles and feathers, a row of half-clams and feathers, and finally a row of interlocking circles that all had to be ripped out.

This quilt was really not planned very well at all.  I thought I would use the feathered cable that borders the pieced stripe throughout the quilt, but the feather spine template I was using was not designed for cables and quilting the four lines of the cables with it it was so tedious I really wanted to give it up after doing the first stripe with it - but I had invested in it and was pretty tired of ripping out quilting by that point - so just one more cabled row sets off the pieced area.

Here's another photo of the pieced stripe. 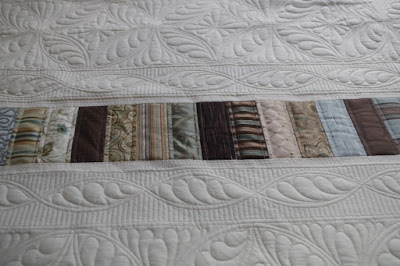 Happily, my lack of planning somehow resulted in the same 1.5 inches of border on the final edge, to balance with the same width I had filled with angled straight lines on the first edge. 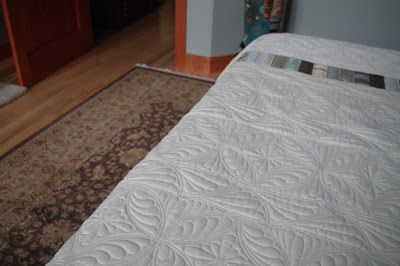 I hope the natural colored sateen fabric will last a little longer than the printed fabrics of the old quilt - but maybe five years from now, I'll have a different idea to try.

Email ThisBlogThis!Share to TwitterShare to FacebookShare to Pinterest
Labels: Our House

I think it looks great! Modern but with traditional quilting. What do you plan to do with the faded quilt?

Beautiful job... As usual! I love the use of the decorator samples. And all that gorgeous quilting!

Your creativity and workmanship never cease to amaze me!! I have always loved quilts with a lot of "white" space because it really shows off the beautiful quilting!. I can't imagine ripping out an entire row, but sometimes you just do what you have to do!! Glad you stuck with it.....it was worth it....it is gorgeous!

I know how you feel about getting into a project that takes 3 times longer that expected (lime green pebble circles) but it turned out lovely.

Your new bed quilt is so lovely. You should feel very proud of it. And I hope you feel very content sleeping under a beautiful and unique piece that no decorator could have sourced for you. Well done!