The Flower Garden is quilted 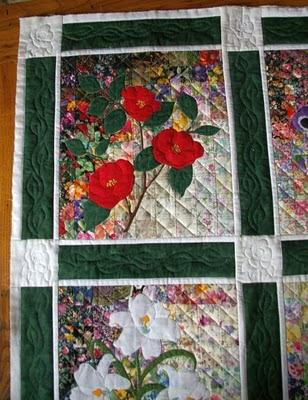 This next photo shows the quilting best - that is the happy result when you use a light colored, low contrast fabric for the backing, but it does mean the quilter has to be extremely careful when tying on and off. Barbara had marked the roses in the cornerstones in pencil, so I quilted those as she intended. Crosshatching the background was my idea - it's very traditional and mimics hand quilting, which we know Barbara did. Crosshatching is difficult and time consuming to accomplish on the longarm, but the pattern designer used a leafy vine in the green sashing. When I followed her lead with the leaves there to go with the little pre-marked roses, I wanted a design for the block backgrounds that uses straight lines. Straight lines make such a striking counterpoint to the curved lines of the flowers and leaves of both the setting pieces and the applique' of the blocks. 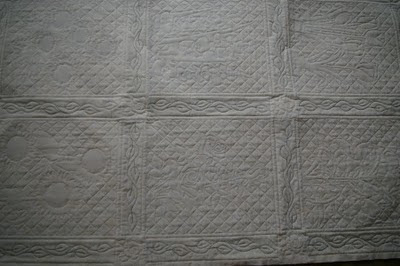 Although all the flowers had all been quilted to the batting by Barbara and the Firehouse Bee members who finished making the top, I had to quilt many of those lines again to adequately support the quilt backing. I used thin threads in about 10 colors so my lines would disappear on the front.

Just for completeness, here's a photo of the entire quilt - 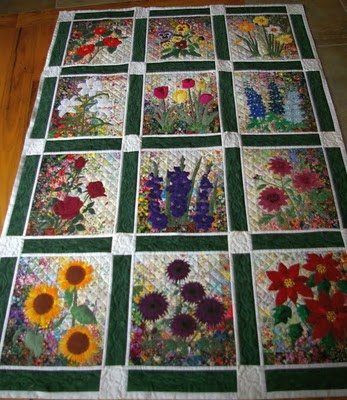 The bee members are preparing to bind and put the label on this quilt.
Posted by Cheryl K. at 10:35 AM

Email ThisBlogThis!Share to TwitterShare to FacebookShare to Pinterest
Labels: Quilted in Memory

This is a lovely way to respect the memory of Barbara. I was at a quilt show recently and this pattern designer had a booth there - I do believe you have quilted this with greater effect than the original quilt. Well done Cheryl.

You continue to amaze me with your talent!!! This is beautiful and I love the crosshatch.....use it a lot as a handquilter....especially on appliqued blocks.