Ms. Brackman created a simplified Stars and Stripes block for us this week. My stripes are straight, but the camera angle was not because my design wall is full - the bare spot I found was above eye level. 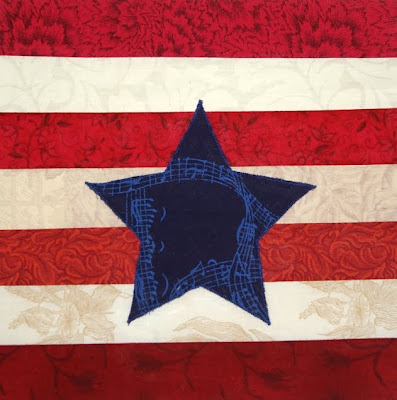 I looked through the blues that have been set aside for Joyce's quilt to come up with this musical print one for the star. One of my "white" stripes is the reverse side of the cat-in-the-garden toile I've used previously. I objected to the design's even number of stripes so I changed it to mimic our flag's red stripes top and bottom. I cut my stripes at 1 3/4 and used a slightly larger seam allowance than usual. I only had a bit to trim from the top and bottom to get an 8.5 inch square.

I hope Ms. Brackman is not staying away from applique because of the comments she had on the only other one she's had so far. I used my favorite silk thread buttonhole stitch on raw edge applique for the star. One point came unglued as I worked - doesn't it give the star a dancing aspect?
Posted by Cheryl K. at 10:52 AM

I like how your star is dancing to the music.