With no organized Block of the Month, I'm choosing blocks to go with my own family Civil War stories from here until Eli will finish his service later in 1865.

For January, I chose to make the block we usually call "Churn Dash" these days, but one of the names it has gone by is "Sherman's March."  I made it look a little different with an unusual color placement - the floral strip with bright blue just seemed to want to be used this way. 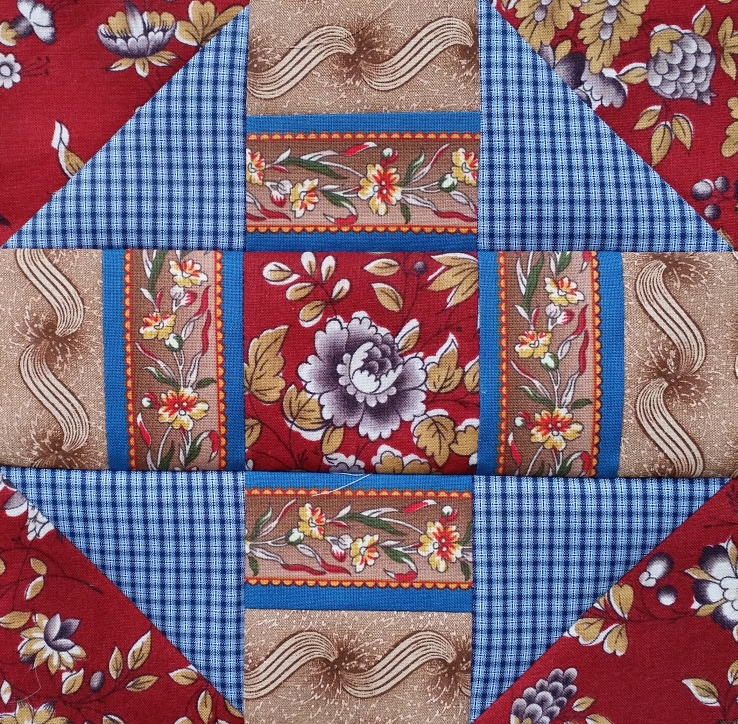 We made this block in the 1862 Civil War block of the month, when it was called "Lincoln's Platform."  It's a simple block that goes by many names.

Sherman's March honors the men of the 82nd Indiana who had made the March to the Sea that ended in December.  There are no more published letters from the Hayden Indiana soldiers of the regiment, so this marks the end of the first-hand contemporary accounts.  The regimental historian later wrote of their experience, " ...Now, to let the loved ones at home know of their victory and safety, and to hear from the dear ones at home, was the next pleasant task to accomplish. ... We had no men killed or captured in the Eighty- second, and very few sick on the campaign. This was decidedly the finest soldiering it was my pleasure to meet with during my time of service. Plenty to eat, reasonable marching, and just fighting enough to remind us there was an enemy in our front. To give its proper standing I would call it a regular " dress parade" performance from Atlanta to the sea.  (History of the Eighty-Second Indiana Volunteer Infantry by Alf. G. Hunter, 1893. p 145)

As for the 52nd, the Regimental History tells us, "Battle of Nashville December 15-16. Pursuit of Hood to the Tennessee River December 17-23. Duty at Clifton, Tenn., and Eastport, Miss., until February, 1865. Eli Hause started a letter to his cousin on the 3rd of January, though he did not finish writing it for some days He does not mention any fighting or what duties the regiment performed - it is possible he had sent that information to his parents, from whom Calvin would have been informed. The letter is postmarked, Cairo, Illinois.


"As we have got through to the Tennessee River & board of a boat again I thought I would write a few lines to you in answer to your kind and welcome letter of the 11th Inst which found me better off than what I am now; there is some kind of a swelling coming on my left leg just above the knee it has been very sore and painful for the last four or five days so much so that the doctor had to haul me in the ambulance, we reached the Tenn River last evening and embarked today about noon and are now on our way up the River to Eastport which I understand will be our destination

Jan 4th well Cal they kept moving us around so much yesterday that I could not finish this we drove up to the bank last night and hitched up and are laying here yet and it is now about two oclock, my leg pains me worse today but am in hopes that it will do better soon."

After some mention of friends in Hardenburg, Eli writes, "If I were there I would not be afraid to try you a game of eucher seven up or even a game at eating Buckwheat cakes I think that I could hold you a very close game at either, why didn't you call around Sunday evening and invite me to go with you Monday to hunt Rabbits. ... I did not see much fun Christmas & New Years this season how did you spend the time?"

Eli finishes his letter saying, "well Cal you think that you are a poor scribe if you just knew how much good a letter from you does me you would not think of that, when I get a letter from you with two sheets filled full I sit down and read it over & some time think that I have missed some of the pages and go back and read it over and still it seems so short, well as I have nothing of interest to write I will close this scribbling."

The letter was postmarked Cairo, Illinois, either the 12th or 13th of January, and Calvin received it on the 16th. My great grandfather took Eli's words to heart as he did not take more than a few days to send his next news from home.

Here is a photocopy of the first page of Eli's letter. It's the first example I have of anything other than blank paper. 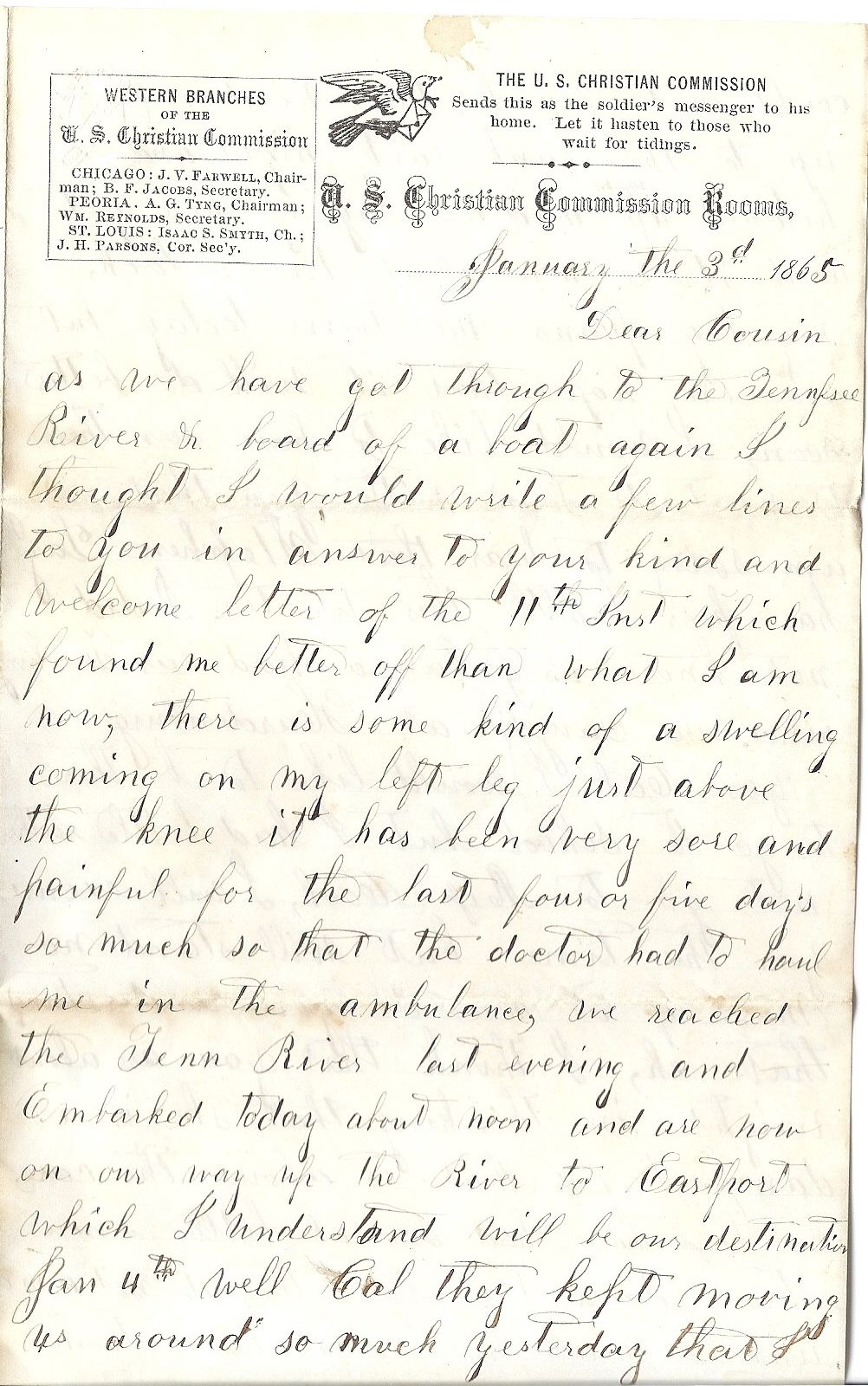 Wikipedia has this article on the U.S. Christian Commission's role during the Civil War:
http://en.wikipedia.org/wiki/United_States_Christian_Commission

What a pleasure to see that nice handwriting! I was thinking that my grandchildren might just start using a keyboard in kindergarten and might never develop a recognizable cursive handwriting. That's kind of sad.
By the way, I like the block, as well. It's one of my favorite traditional blocks and it's quite lively with those fabric choices!