Dorry worked with some local friends and our International Round Robin cohort Rhonda to make this quilt as a gift. I brought it back when I returned from my trip to the Washington area earlier this month. The green and black blocks are called Courthouse Steps. The blocks are somewhat difficult to pick out because they are set on point in the quilt with their direction alternating -- and some are partial blocks. Dorry worked with quilt designer Ann Weber to come up with the setting of the stars and steps. 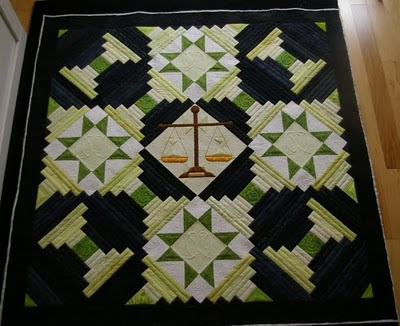 Kerry - Dorry's sister and also a Robin - had sent me the Maori quilting motif we used in the star centers. We saw this design earlier in the Round Robin quilt I assembled for Dorry: Robin Heather used it for an applique motif in two of the blocks that appear toward the left side of the quilt. (click on the image that appears at the link to see the photo large enough to appreciate Heather's versions.) The Maori Koru symbol appears in the green squares at the center of the Courthouse Steps blocks, and inspired the quilting for the border and background fills. 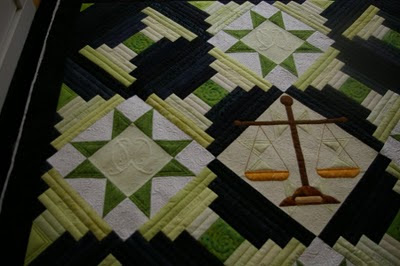 This magnified and lightened photo shows the border quilting - 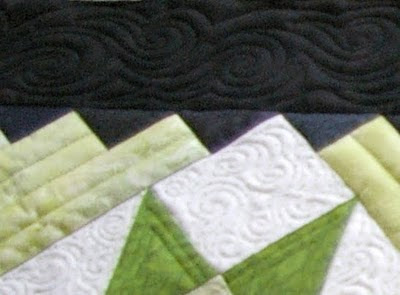 We hope the recipient appreciates all our work.
Posted by Cheryl K. at 1:00 PM

appreciate? How could they not? This is great!

It looks really good Cheryl, your quilting is superb! I am also sure the recipient will like it!

The quilting looks wonderful! I love the Maori quilting motif used in the stars and the background fill stitching. Just beautiful quilting, as always!