There were a lot of new seamlines in this redesigned sawtooth star block. Some of the extra piecing could have been distracting from the star I thought, so I followed our leading block-modeler Becky and used low contrast fabrics for the four sets of triangles around the center square on point. 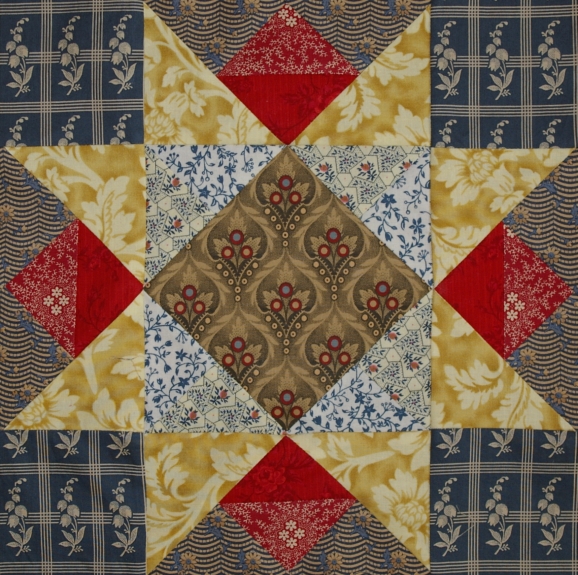 I bought some new fabric at the Quilt Show in Chattanooga I was able to use to make this month's block work for me. I already had the interesting plaid overlaid with a flower that I put in the four corners.  I had not felt it would work in any of the previous blocks of this series.

In early September, 1864, the 82nd celebrated the fall of Atlanta. Allen Brown wrote to his wife on the 3rd, "The glorious news has reached us that Atlanta is ours and the wildest enthusiasm prevails and the soldiers that have fought so hard for almost four months have the right to rejoice."

Later in the month, Billy took time to write to his sister Joanna after having received her letter describing the mood at home since their brother Shep's death:  "I am very sorry that Mother mourns and worries so much about dear Shep.... he is a great deal better off than you or I, even if he was alone, I don't think he needed anybody to pray for him for I believe that he was as good a Christian as could be found and am sure he died perfectly satisfied. If he died in a regular U. S. hospital, he was buried in a mahogany coffin. But he is just as well off if, of course, he was buried in a board coffin. Even a soldier that is buried in time of battle, with nothing but his clothes and blanket, is just as well off in the future world as though he was buried in marble. If it is my fate to be killed or to die with sickness, I don't ask to be taken home. If our dear brother Shep could see us mourning his loss, he would say to us, why do you mourn for me? I should mourn for you instead of your mourning for me. I am happy while you are still in that troublesome world, but oh my dear friends, but there is but a faint shadow between us. Soon, why, soon, we will meet again where parting is not known."

Billy told Joanna there was no word on whether the men of the 82nd would be given time to go home on furlough or to vote.  But Billy was not concerned - he believed he would have no more than the requisite 9 months left (per original terms of the 82nd's service, implying the war would be over by that time.)

Eli Hause with the 52nd wrote to Calvin on September 28th, from "Camp at Jefferson Barracks."  This is the envelope (if you click on it for a larger size it is much larger than life).  When I transcribed these letters, I included postmark information, but other than the Sept 28, I can't make out the letters on this one.  It was informative that Calvin wrote the date he received and answered the letters right on the envelope. Receipt date could have been slowed simply because there was no home delivery of mail: someone had to pick it up at the post office in town. 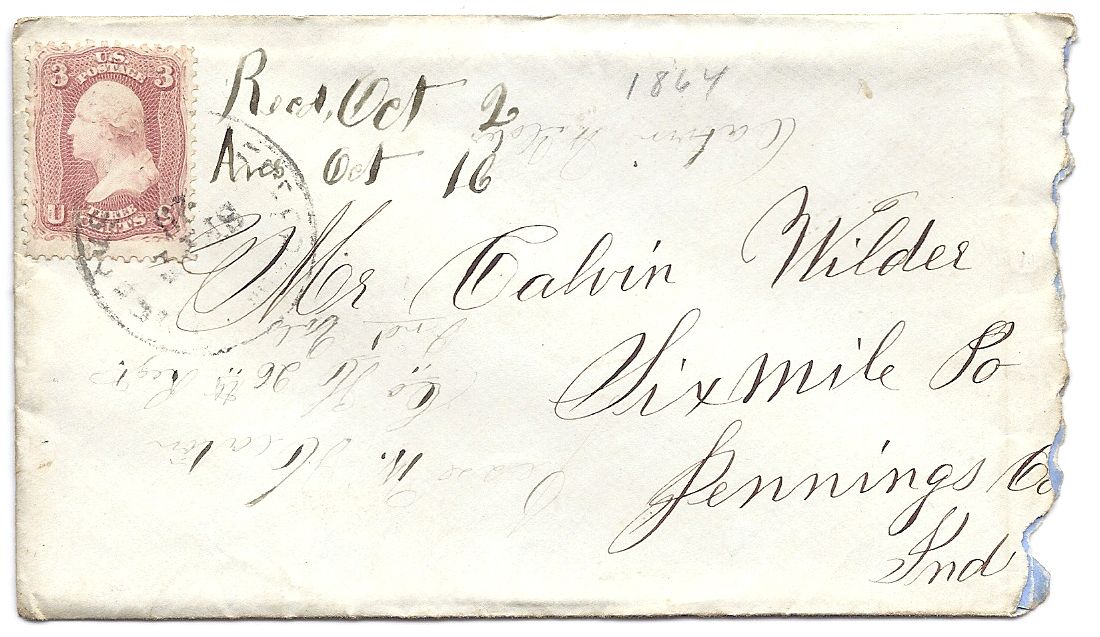 It is interesting to me that this letter has another address on it, faintly written in ink, and upside down. It is addressed to Jesse W. Heaton, Co H 26th Regt, Ind Vols, with Calvin's name below on the left (if you flip the envelope around.)  The Heatons were neighbors of Calvin's, and two letters from Jesse's brother Bivans to Calvin were in small envelopes with no stamp and no address other than "To Calvin Wilder/Next Door" or "please hand to Calvin Wilder" on them. Bivans saved on stamps and I imagine the Heatons and Wilders picked up mail for each other regularly.  But I don't know why Jesse's address is showing up on Eli's envelope. Perhaps Calvin forwarded Eli's letter to Jesse in a letter of his own (they were all good friends) and Jesse returned the letter to Calvin later?

Jefferson Barracks is located on the Mississippi River at Lemay Missouri, south of St. Louis, and is still is use by the Army and Air National Guard. The 52nd was starting their pursuit of Price in Missouri. Eli's letter consisted mostly of comments on various bits of news Calvin has sent him from home, with a little bit of his take on the political sentiment in the regiment. He adds, "I am glad to hear that there is going to be lots of wheat sown this fall. I am in hopes that I will get home in time to help harvest it if nothing happens." 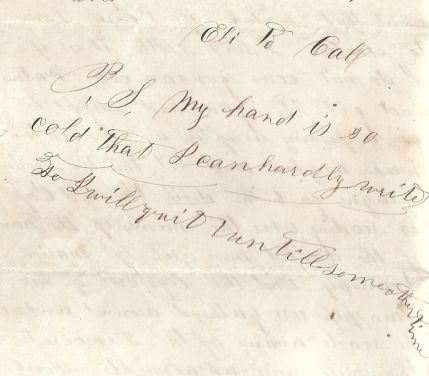 My transcription of this signature and postscript is "Eli to Call  P. S. my hand is so cold that I can hardly write so I will quit untill some other time"

Again, your spectacular block is overshadowed by the detailed letters you quote from! Such articulate first hand descriptions being sent home, as well as touching condolences. The post mark was not decipherable, but remarkably it is basically the same type of post mark we see today.