By March of 1865, the 82nd Indiana was still moving north with Sherman, sweeping through the Carolinas with the goal to join up with Grant at Petersburg.  The 82nd was among the Union forces at the indecisive encounters at Fayetteville and Averysboro, and finally on the 19th-21st, at the Battle of Bentonville.  Bentonville was the last major conflict between Sherman's forces and Joe Johnston's. It's one of those Western battles we don't read as much about as those of the East.  Since it took place right here in North Carolina, I'll plan to go there on some future journey.  The outcome of Bentonville was a Union victory but I don't know what role my great-grandfather's regiment played. 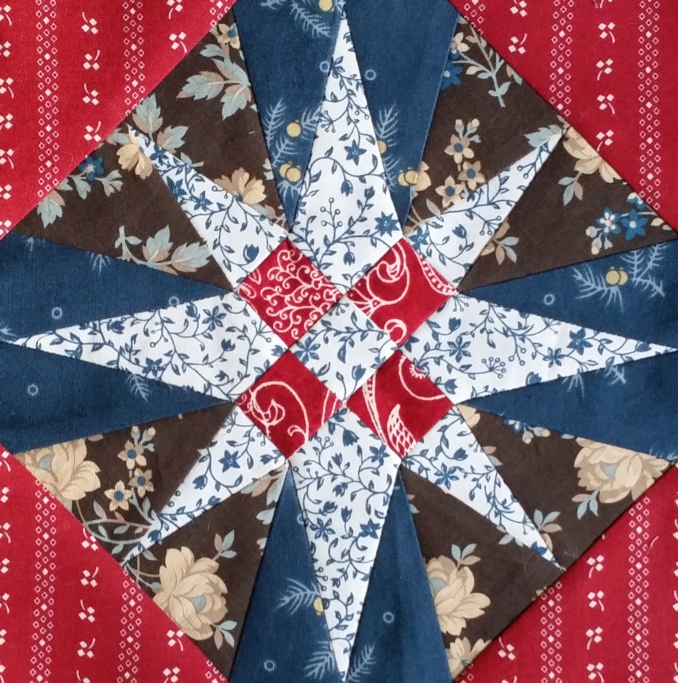 It was not an easy block - I paper pieced it, but still had eight "Y" seams to contend with once I had my seven foundations ready.  I think this block would be really nice at a slightly larger scale - this is  eight inches.

The Indiana 82nd's big battles may be over by this point, but the soldiers still have some marching to do as we will see.

The 52nd moved from Eastport to New Orleans in February.

Eli wrote a long letter to Calvin from New Orleans on the 2nd of March.  The postmark was the 6th, but this letter was in transit a long time as Calvin only received it on the 17th.  I like this letter because there's a lot of detail on Eli's life with the army, which I am excerpting.

Eli was happy to hear Calvin wouldn't be drafted at this time and says, [with minor corrections for readability] "...we live very well here to what we did at Eastport we have plenty of rations besides turnips and greens in abundance. This is really a land of milk and honey, but I have not seen any of either yet. We have orders to be ready to move at an hours notice. I suppose that we will go around on the Gulf in a salt water ship - the talk is that we are going to an Island near Mobile and if we do I am going to build me a house of Oysters, and then lay by them for they say there is plenty of them there. ... you want to know how it is arranged about cooking, The Company is divided in to six messes and they cook just as they are a mind to at the time. There was another fellow and I were cooking together but we have seperated now and I live by myself. I have what you call a spider at home but we call it a frying pan that I fry my meat in and a little bucket with a lid on it that I make my coffee in and then there is buckets mess from Camp kettles that belongs to the Company that is hauled in the wagons, and then I have a tin plate cup knife and spoon to eat with, and I get along splendidly but if I just had you here how happy we could live together."

" ... I will have to tell you a slick joke on one of the boys that thinks that he can play seven up with any of the boys but I am afraid that you will think that I have got to be a great black leg but how ever I will tell you. Night before last after I had gone to bed he ... hollowed to me and said that he could beat me three best out of five for the turkey (meaning canned turkey). At first I refused him, said he would give me a game to start on and then I would have but two games to get while he would have to get three, well I told him to come and bring his candle and cards, and we went at it. ... I let him get the first game very easy and then I went for him and beat him two strait games.  The turkey is $1.50 per can they will hold about three pints. The turkey is very good but chickens are better.  I do not suppose that you ever saw any of them. It is not very often that I do the like of that but I did not like to see so good a chance slip by, as money is scarce. ... Fighting is not so common here as it was at Nashville and as far as I am concerned I do not want it to get that either. ... Cal I have seen ships sailing up and down the river since I came here, I saw one that came ... all the way from New York, I have seen oranges on the trees some green some partly ripe and some entirely ripe I tell you they look pretty sure."

The 52nd would be involved in the campaign against Mobile and its defenses starting March 17th.

Dreaming of a house of oysters, details about camp cooking, and gambling by candle light for canned turkey... Good stories here!
And, I recognize that background red fabric. I just pieced a block with it yesterday!