My setting for Dana's Grandmother's Choice requires 52 blocks. I decided to make one for each grandmother, and one more.

Today's block is for my grandmother Mary.  Mary was a devoted Catholic from a strong Catholic family -- two of her sisters were nuns.  The strength of her faith is an important part of my memory of her. With my good friend Dorry's help, I chose the Crown of Thorns block to represent that memory. 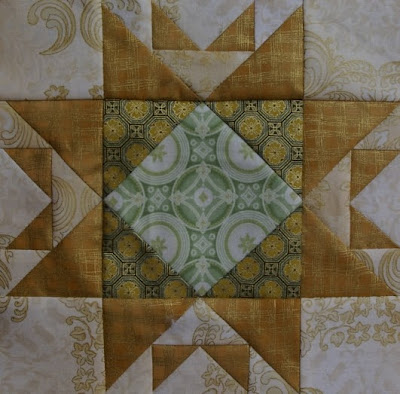 This Crown of Thorns is made with ornate and metallic fabrics that evoke for me the interiors of Catholic churches here and in Europe.

One childhood memory that includes my Grandmother Mary is the 1965 family trip to New York City and Washington DC.  That year, the Vatican Pavilion at the World's Fair displayed Michelangelo's Pieta, the only time the statue ever traveled outside of the Vatican City.  The Pieta was set on a special platform in a theater with a deep blue background, while viewers moved slowly across the theater on mobile walks at various heights. I was only a child, but looking at the statue with my grandmother made a lasting impression on me.  I know Mary made a trip to the Vatican later (she traveled extensively in retirement) - I wonder if she saw it again?

During that era, most of our family memories were captured on movie film. But we have one very special photo from the trip. We had tickets to the Senate. Richard Anderson, our minister's son, was living in Washington and escorted us around, taking us by way of the Capital Subway system.  It happened that we rode it at the same time as President of the Senate, Vice President Hubert Humphrey, who was traveing with his photographer. 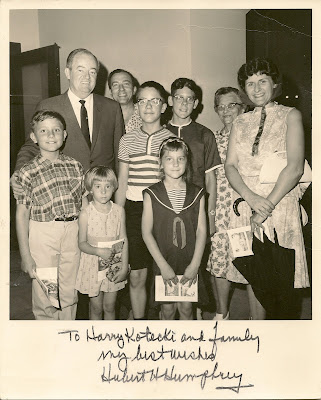 Mary is in the background behind Mom's shoulder and Dana, Hubert Humphrey has his hand on your dad's shoulder. At five, Joyce was too young to be admitted to the Senate chamber and was entertained by Richard in the lobby while we got first-hand exposure to our representatives in action. It's hard to imagine that we all traveled from Chicago to Washington and NYC and back in a 1959 Chevrolet station wagon, luggage and all.
Posted by Cheryl K. at 5:58 PM

My family took a trip to DC in 1965 too! Wish I had a great photo like that to remember it by.

This block is absolutely exquisite! The gold gives a feeling of royalty. Beautiful mix of fabrics, colors and patterns of design.

Oh yes, this block worked out so well with your fabric choices. Now I want to go look to see where you placed it in the quilt top.

I remember seeing the Peita at the Worlds Fair, too. It was my first airplane trip. We took a chartered plane with a group from my father's work and flew to NYC from Buffalo, saw the fair, and flew home all in one day! The return flight was very turbulent and just about everyone got sick. I don't think my brother has been on a plane since.

Wow- I thought so. Can't believe I've never seen this picture before, this is great.