Finished sweater - but not for me!

It feels like I haven't finished a sweater in a while. Back in February, when Joyce and Niki were here, I planned a project for each of them. Niki's boot toppers were done in April, but Joyce's sweater was going to be for this winter. Joyce was slated to come to North Carolina at the end of July, so while we were in Chapel Hill, I sewed it together so she can take it home with her.

I changed a few aspects of the designer's pattern for this sweater, Estrid, by Elsebeth Lavold, making the collar smaller, the bottom edge straight across instead of pointed at the bottom of the cable design, and adding the cable design to the center back. I also shaped it for the waist and slightly modified the drop shoulder to remove some extra stitches from the underarm area. 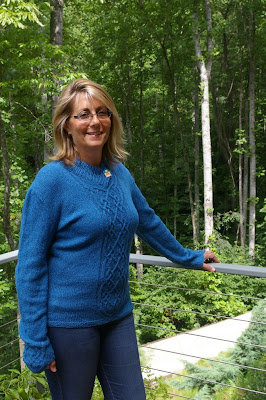 Joyce picked this delightful shade of blue.  It's one of the pattern designer's own yarns, Silky Wool, which I also used in a different color for my own sweater by the same designer, Ylva. 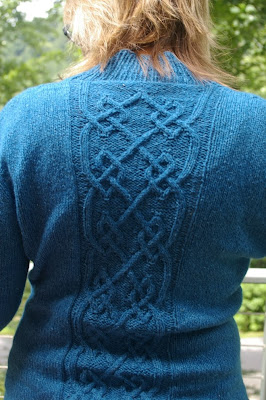 The cuff area of the sleeve is as designed, somewhat long with the point of the cable motif falling over the top of Joyce's hands. 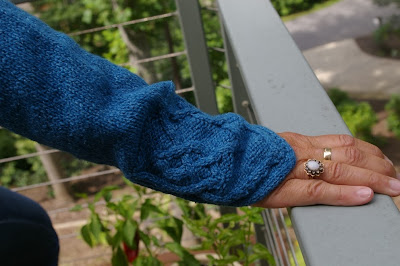 Just for fun, I tried some photos with different lighting and really like this one of Joyce's face! 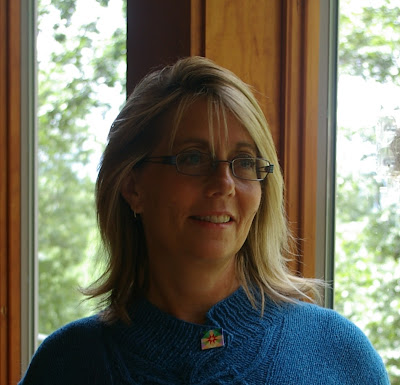 Beautiful, Cheryl. Love your work, whether knitting or quilting!! Joyce is lucky to have you as her designer!!

Beautiful sweater, Cheryl. I love the color, the longer sleeves with the point over the hands and the intricate cable on front and back. I'd like to be sitting behind Joyce at a concert or lecture so I could study that cable!

This is a lovely sweater, and the color is fab!

Spectacular, Cheryl! Your pictures are really good too.