The block this month recalls deprivations Sarah Morgan and her family in Louisiana suffered. 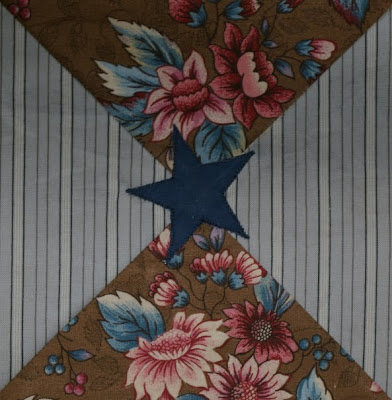 I think of this as the Hourglass block.

Shep Whitcomb got to go home for a furlough in August, 1863. A letter from a friend still with the regiment on August 11th tells of his testifying for a comrade who was subsequently restored to duty without loss of pay. Another member of the regiment was killed cleaning his own revolver. Interestingly, he tells Shep a letter came for him from Charley (probably Shep's brother, my great great grandfather).  Had the letter been from brother Billy with the 82nd, his friend would have opened it.

Billy sent a letter home to Henry and a sister on August 8th from Camp Thomas, Tennessee, just back from a blackberry scout. He has heard "hints" that England and France were going to attack but hopes that is false.  He is aware that Shep is home and wishes he could be there too, and says that if nothing happens before next year at this time, "we will both be there to stay." He writes, "You spoke about the visiting party at Father's. You said that Shep couldn't relish one of mother's old fashioned dinners. If you think I couldn't, just try me. I'll bet a hoss that I could do a large share towards demolishing one or two anyhow. I might be like the feller's hogs after that.  There is a chance now for enlisting in the regular Army or something similar, but I guess that I shall be content with what I have. Not that I am sick of my bargain, or that I have ever regretted one time that I came, but if I get through with this safe, they may kiss my American star-spangled foot before I will go into it again. I would just as soon be a soldier as anything else if it were not for 2 or 3 objections."

On the 16th of August, with the army planning for capture of Chattanooga, the 82nd broke camp and was sent to Bridgeport to construct a bridge over the Tennessee River. The Bridgeport in question is in the northeast corner of Alabama.  A history of the town, including the destruction and rebuilding of the bridge multiple times, can be found at this link: http://www.historicsouthpittsburgtn.org/Bridgeport.html

After the bridge was completed on the 31st, the 82nd rejoined the army at Battle Creek, and began to cross the Tennessee River there. It took two days to get the regiment across on temporary rafts.
Posted by Cheryl K. at 4:18 PM

Your block is a pretty combination of two different styles of prints. I really like that quiet support the stripe gives to the more bold floral print.