Ms. Brackman chose an arc to symbolize that the fight for equality is not yet finished, and a quote from Martin Luther King, Jr., "The arc of the moral universe is long but it bends towards justice." The quote is based on abolitionist minister Theodore Parker's much earlier writing. 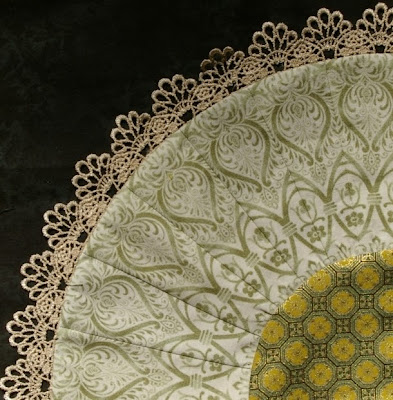 This is the last block of the series - I have three extras for my setting for Dana's quilt, but I decided to elaborate on the given block to make this fan. It was really fun to see my fussy cutting come out the way I intended it to!

My posts for last three blocks will feature more family photos, but today I am sharing three more of Faye and Fielding through the years.

This one is undated, but Faye and Fielding are wearing the same clothing as in the 1940 era photo of them with their five living children that I posted for Week 11 back in November. 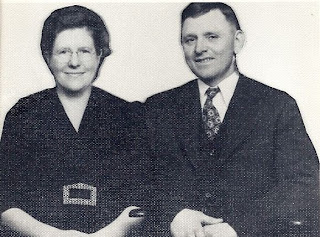 This photo is from Aunt Alice's collection, labeled Anniversary.  Their glasses may be the same, but Faye's dress and jacket are different than what she wore for their 50th in 1963. (photos at this link).  It was probably also taken in the 1960's. 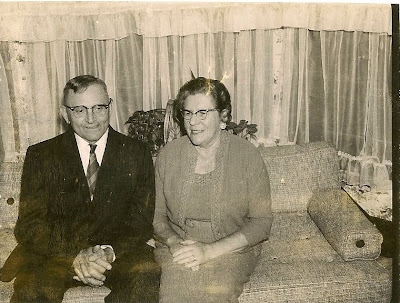 And finally, I believe I took this snapshot with a little Kodak Instamatic when I was in 4-H taking a photography project, so it was probably from around 1970.  Faye and Fielding are sitting on a picnic bench in the Johnson Mound Forest Preserve in Kane County, where my mother grew up and where they retired. I know it was not a posed shot, they were simply enjoying the family outing together. Fielding would have been about 80, and Faye just two years younger than he was. 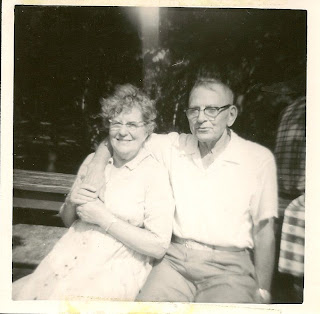 Oh such a lovely interpretation of block 49. Do you want to tell us anything about that trim? It'll be interesting to see how much the fussy cutting aspect we have gotten into for this project carries over into future projects we all make. This block demonstrates your great skill with both fussy cutting and fussy matching. Well done.

I agree with Dorry - you have made such an elegant block with your fussy cutting and that trim. I think the fussy cutting looks like smocking.

Dana is a lucky young woman!

So feminine with the lace. I'm surprised the lace doesn't have a story! The fussy cut fan truly looks like a fan... Very clever, and yes, skillfully done.