This week's block was probably my least favorite of all so far. Ms. Brackman started with the idea of a Carolina Lily block, then, to make it more doable at 8 inches, substituted a simpler version with only one blossom. I was not inspired. 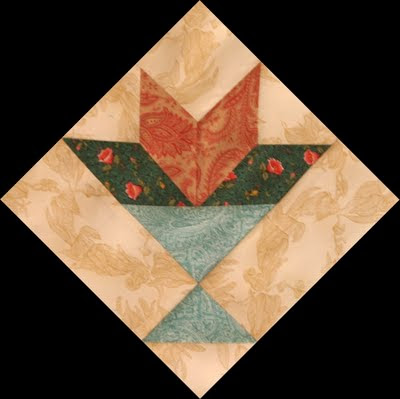 As I did with the basket block (Week 13), I have used photo editing software to place the block On Point. It doesn't improve it a bit.

I also don't like making these blocks based on some other grid in an 8 inch square. This one could have been simplified so the flower part was one grid, and the large background rectangles and silly triangle base to the "pot" was another. Too bad I didn't think of that before I started working on it!
Posted by Cheryl K. at 5:21 PM

Your work is beautiful, as always, Cheryl, but this design is not exciting, you're right. I don't DISlike it, but there are others that vie for first place for me.