Back from the trip for Roger and Laurie's wedding outside of Chicago, I finally got this week's block done - I wound up following the lead of Dorry and other quilters and paper pieced a simpler version of the five-pointed star: 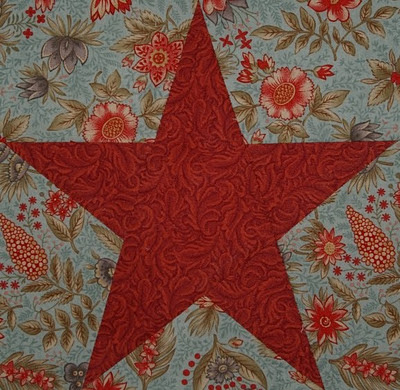 The good news is I talked with Laurie and she was happy to learn I was making a quilt for her and my brother Roger. I got to see the living room of her beautiful 100-year-old home in Oak Park Illinois, and this quilt will go perfectly with the furnishings and decorations she has. So now I have confirmed the direction for finishing the quilt. The decision to add blue to the fabrics I was working with came a few weeks after I started it, when Brother Roger announced his wedding in October. All of a sudden I had the idea to make this as a wedding gift. Laurie is a Horticultural Therapist, and I had so many floral prints in the mix, that was easy. And Roger gets dressed up as a Civil War vet and entertains crowds of people: 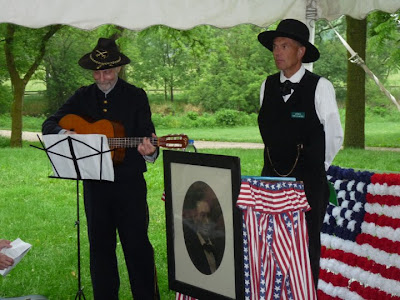 (Roger has the guitar in the photo above, and is featured in the center of the photo below) 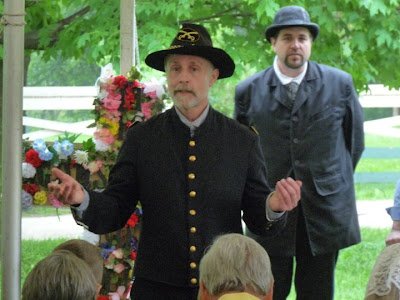 However, Roger has always liked any color, as long as it's blue, so this has to be a predominantly blue quilt. My initial group of fabrics had no blue at all - but you can bet I've been adding to the mix to fix that. I love the way the new layer cake prints combine the blues and reds I was already using, as in the background print of this block.
Posted by Cheryl K. at 2:09 PM

These fabrics are a beautiful combination for this star block. And it is great to hear that the intended recipients now know about this.

I, too, love the background floral....your brother sounds like an interesting fellow!