It was suggested we use a mix of shirting fabrics for the light colored triangles that make the square, to represent the women making do with what they had when new goods were not coming in to Southern ports and stations. I used four fabrics I had already designated for these blocks, which did not include shirtings. To get the faint blue color I wanted for one of these, I used the reverse side of a print I used the same way in the Lincoln's Platform, week 10 block. 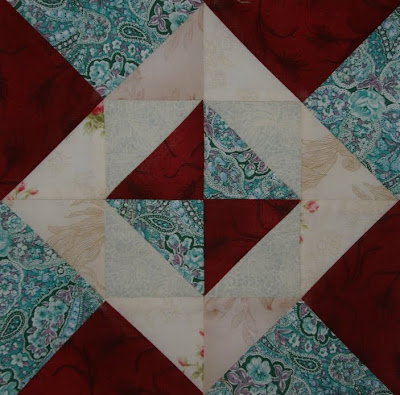 The block was easy to piece - though I should have thought through my pressing a little better so as to wind up with opposing seam allowances when piecing the four quarters together. This is one of those instances when consistently pressing toward the dark is not necessarily the wisest choice.
Posted by Cheryl K. at 3:59 PM

Pretty! You are right. I, too, learned that traditional pressing is not always the best use for specific patterns. It MATTERS how the seams come together!

Do you think there was some significance in how red was used in this block? I see on the flickr site as well as BB's page and of course your block above Cheryl that red is a dominant feature. Thanks for the warning about the pressing.