Brown Eyes is what I call Dorry's latest quilt, made for a guild challenge. She was to create a quilt based on the song, "Don't It Make My Brown Eyes Blue."

(be sure to click these photos to see details!) 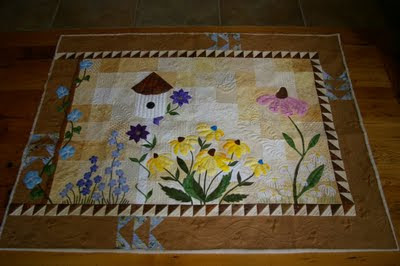 Dorry had several requirements to meet for the challenge - mine was not to spoil the magical effect of her work. I don't know if the quilt was casting a spell, or if I was just in a better frame of mind to do this kind of thing than I ever have before. Perhaps it was looking at all the Zentangles, which I had been studying before I took the class a couple of weeks back, reported here. 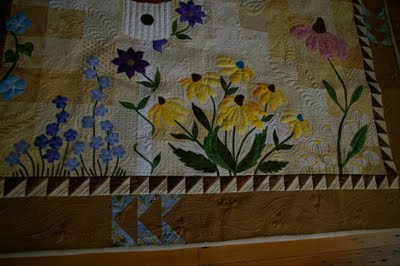 Dorry's beautiful gardens have flowers and a bird house just like she has portrayed in her quilt. Her birdhouse has yet to attract a bluebird, but I gave her one for the quilted version, visible to the left of the coneflower. 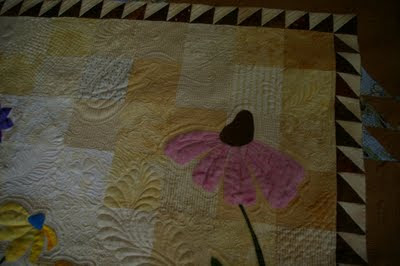 I used more different quilting motifs for the background fill than I have ever done on one quilt before: feathers, leaves, swirls, wavy crosshatching, clamshells, fans, and shamrocks are the ones I can think of. The three diagonally oriented curved echoed lines in the center of this next photo are loosely based on a Zentangle design I had not previously attempted in pen and ink. The quilting in the light triangles is related to the echo and fill border I gave all the appliqued flowers. 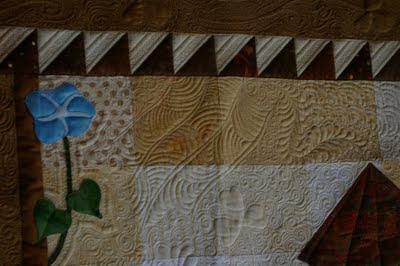 The backing Dorry chose affords a different view of the quilting. 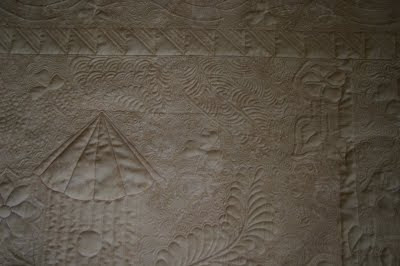 This last photo shows the extensive fill quilting I did on the shamrock border I posted here back in early April. 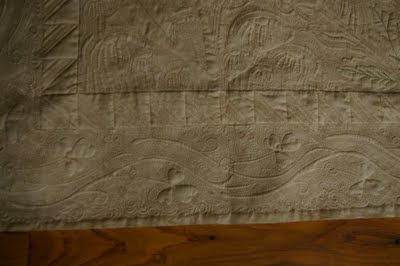 Dorry plans to add crystals to the quilt in honor of the song's recording artist. She has about a month to do that and get the quilt bound for the Quilter's Unlimited show where it will be hung with other quilts from the challenge.
Posted by Cheryl K. at 5:59 PM

Oh, isn't the quilting on this just fabulous! Now I have to do the finishing touches of binding and some embellishments using crystals and beads.

the quilt AND the quilting are exquisite!!