This must be the easiest block so far - 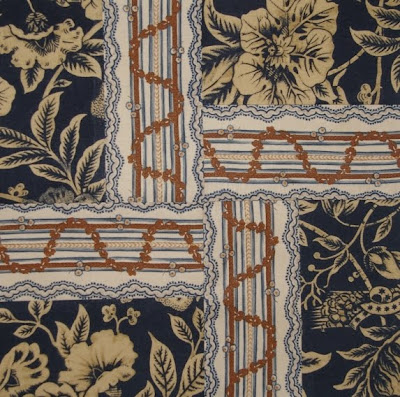 Having grown up where the car license plates read "Land of Lincoln," I never had any regard for Stephen A. Douglas who had defeated our hero in the Senatorial election of 1858. But I recently read Richard Carwardine's Lincoln: A Life of Purpose and Power. His analysis of Douglas - in particular, his actions after Lincoln won the election in 1860, give reason to think differently about "the Little Giant." But I still chose the toile with Lincoln and the log cabin on it (though those don't appear in these four pieces) to pair with the stripe I had been waiting to use until the right block came along.
Posted by Cheryl K. at 2:59 PM

Oh, I love that stripe and you made effective use of it. Your block looks great.