Dorry's sister Kerry is one of the long-time members of the Round Robin group I make quilts with -- they had already been at this for years before I joined up. Kerry lives in New Zealand, and asked if I would quilt one of her previous Round Robin quilts. Putting a quilt into the international mail system is expensive and, well, scary, so Dorry carried the quilt back to Northern Virginia in her hand luggage, then Norris picked it up from Dorry when he was there for business.

Since Kerry will not see this quilt until some future, as yet unplanned, trans-Pacific crossing by a family member, I'm posting a lot of pictures for her to see what I did. But first, I have a photo of the full quilt for readers who have not previously seen what will be shown in parts. All photos can be enlarged for a closer look. 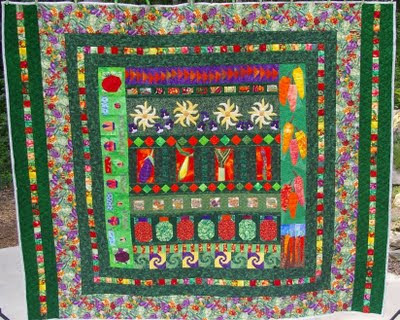 It took a double bed-sized batting and the layout of the quilt is a bit unusual, but isn't it glorious in color and energy? 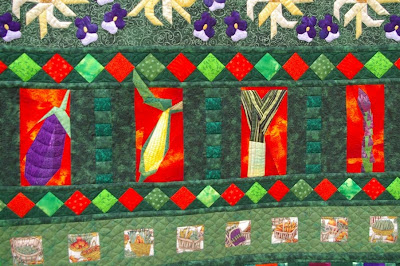 Of all the vegetables, I was most happy with what quilting did for this ear of corn, adding a realistic dimension although the quilting lines between the kernels only go the length of the cob. 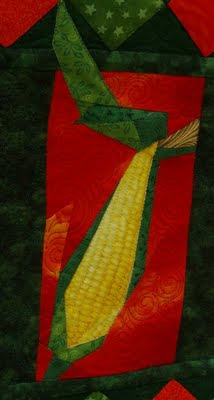 There were not many places for a quilter to add decorative elements of any complexity, but the two green borders that surround the center got bunches of carrots, radishes, and peppers, surrounded by tomatoes. 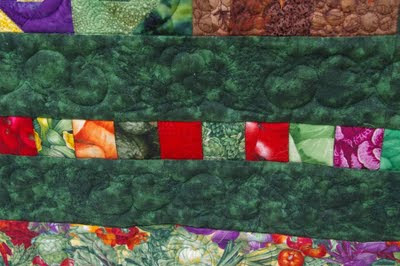 The border with the colorful medley of produce would normally have gotten a crosshatching or piano key treatment, but Kerry asked for Vegetables. A design with a chorus line of Chili Peppers has a similar effect. 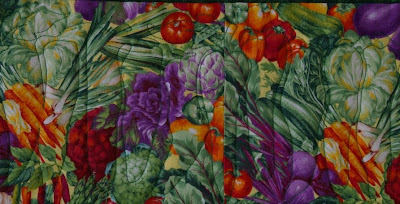 I wasn't confident of my ability to quilt vines with peas in pods. They came out better than I thought, but are a little small to include in tonight's dinner - 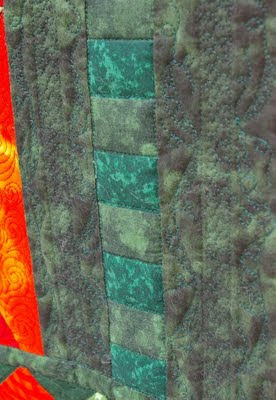 Where I wasn't quilting vegetables and wanted background fill to bring out the intricate piecing, I chose swirls. It was these flying geese that made the choice for me - the swirls give them a little motion. 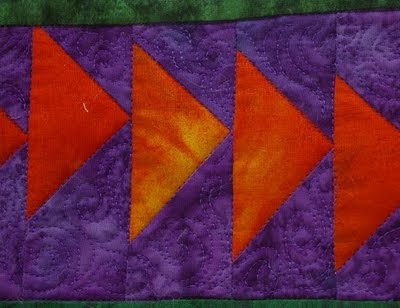 Jars of bugs and vegetables got a relaxed crosshatching, while the flowers and pieced ladybugs were simply outlined. 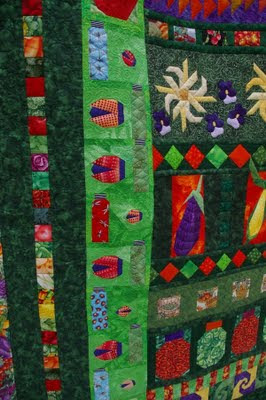 Larger pieced vegetables got lines of stitching to suggest roundness 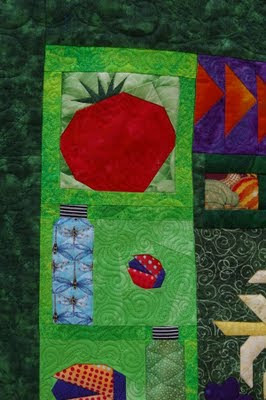 The carrots, firmly planted in the ground, were surrounded by pebbles instead of swirls. You must notice the delightful striped fabric that makes those carrot tops! 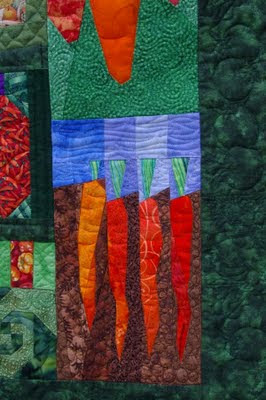 The dark green borders that don't go all the way around the quilt got a treatment that made the quilter happy because it shows up well and but leaves the focus on the individual squares of vegetables. It takes more skill than the chili peppers, but it's worth it! 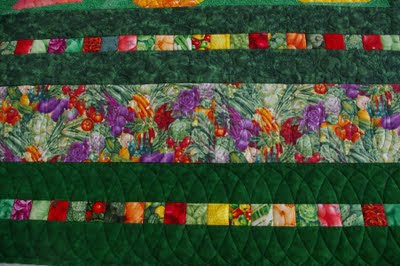 And with that, I believe we may all consider ourselves nourished within the FDA requirements for vegetables for the day.
Posted by Cheryl K. at 7:55 AM

A lot of thought went into this quilt - both from the piecers and the quilter. I hope you enjoyed working in the garden Cheryl as it certainly looks like it. That treatment on the two side outer borders looks great.

OMG - I'm so glad this quilt sat in my UFO pile for all those years until I met you Cheryl!

The quilting is just beyond my wildest dreams! The thought you've put into every smallest part is just unbelievable - I can hardly take it all in.

A million thanks - I trust Dorry will adequately recompense you on my behalf!