Fire engines ready for the longarm 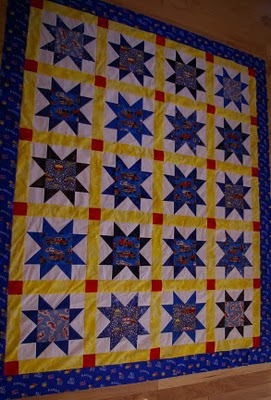 This is the way a client's quilt would come to me when I was a professional longarm quilter: the pieced top would come with a separate backing, ready for me to quilt them together with batting in between. The batting for Kason's quilt is flame retardant - good thing, since the quilting is going to put flames all over it.

I loaded the backing and batting on the machine last week when I was waiting for that yellow fabric. 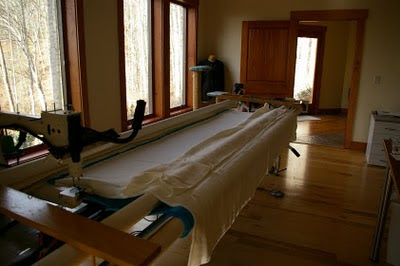 When Kason's father told me Kason's room was being redecorated, he was very careful to say it would be "KU Blue and white." So I had to buy it when I saw the official KU fabric with the KU Jayhawk at Mary Jo's Fabric store in Gastonia, 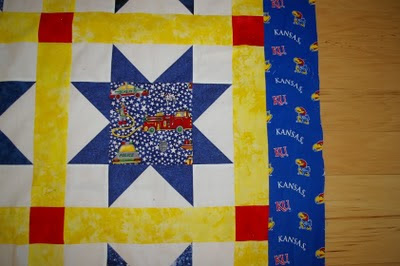 The KU blue goes perfectly with the fire engines and the Jayhawk even has the same red and gold accents. I got enough KU fabric to put the borders on in the same direction on all four sides and you could read the Kansas and KU every where. 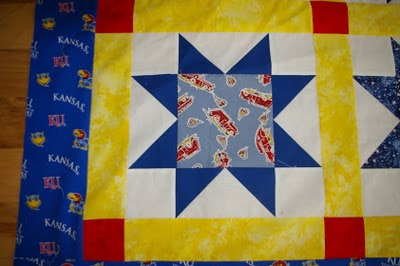 I wonder if Kason can say "Rock, chalk, Jayhawk!"? And if he did say it, would the other kids in his N. Georgia hometown think he was crazy? Will Kason's grandfather Marvin have ideas for what I can do with the remaining hunk of official KU fabric?
Posted by Cheryl K. at 3:54 PM

It's looking good now Cheryl - and soon it will be smokin'!