This week's block is Kansas Troubles - I made mine in pretty roses because they remind me of Norris' mother, Ella. 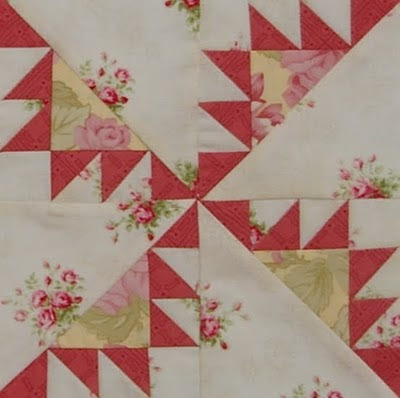 I made this block once before, in a small sampler quilt I made for Ella using all the blocks that were used in the Great Bend Kansas "Quilt Walk" - where quilt blocks were created in the sidewalks surrounding the Barton County Courthouse. The quilt featured the blocks Kansas Dugout (I used it to form the pieced border), Rocky Road to Kansas, Kansas, Windmill, Farmer's Daughter, Kansas Star and Kansas Troubles. I made it for her when she sold her house there to move to N. Georgia after living in Great Bend for almost all her life. 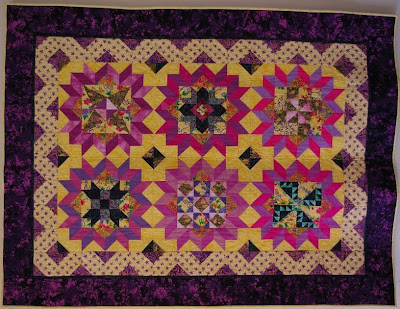 My Kansas Troubles block in Ella's quilt used a different distribution of lights and darks than we are using following the Block of the Week model. I based the colors in this one on the color distribution of the Great Bend sidewalk blocks.

It is an interesting coincidence that Barbara Brackman's Civil War Block of the Week was Kansas Troubles, so close behind Kason's quilt that featured the KU Jayhawk. Jayhawk is a term coined prior to the Civil War that was used to describe the Free State faction in Kansas. The Jayhawkers were part of the violence described in this week's edition of the Civil War Quilts blog.
Posted by Cheryl K. at 7:38 PM

This is a very pretty block you have made this week Cheryl. What size were the blocks that you made for the Kansas Sampler?

Those blocks were 12-inch. The 4 and 9 patch blocks are simple - the only one with weird measurements was the 5 patch Farmer's Daughter. But a 12 inch block is pretty forgiving. I probably printed templates in EQ.

The Kansas Sampler looks beautiful! I am fascinated by the setting in the border. It looks a little bit like a Kansas Dugout block.
The fabrics in your 8" KT are so pretty. The tiny rose fabric is so delicate.
I also like the pictures of the happy quilt recipient! It is nice to have your work appreciated:-)