Today's entry in the Civil War blocks series is Seven Sisters. This block commemorates the early Confederacy (the first flag had seven stars); however, I'm the proud great-granddaughter of a Union soldier who fought with the brave Indiana 82nd on Snodgrass Hill at Chickamauga. That gave me a very different mind set for the fabric choices, because I did not want the block to have undue prominence in the final quilt. I settled on a blue sky and stars chosen to be somewhat low contrast. 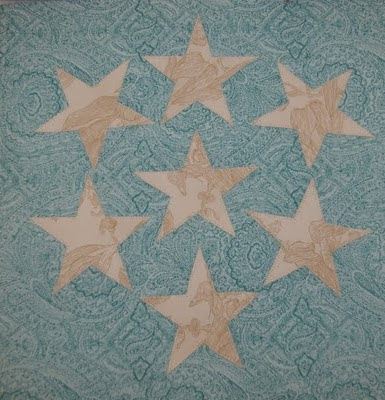 Although Barbara Brackman suggested hand appliqué for this block, I have to save my hand sewing muscles for the times I truly need them, so I fused my thin star fabric to muslin, and fused that to the background for machine appliqué.

Here's a quick look at the three blocks completed so far, up on my design wall. 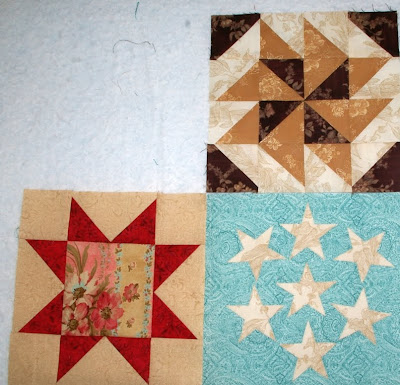 All week, I've worked on the Sawtooth Stars (aka North Stars) for young Kason's quilt. There was no rush completing them - I ordered fabric for the sashing that won't arrive until Monday afternoon. 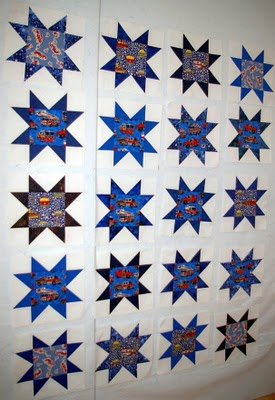 I purchased two of the three firetruck fabrics before I acquired my longarm, thinking I'd make something for Norris with them. Then I saw Kason with the firetruck Norris bought him for Christmas (see photos of Kason here) and also realized he had outgrown the second quilt I made him less than a year ago (see photos of the first two simple quilts at this link - Kason's Quilts). Norris thought the old fashioned firetrucks would be hard for young Kason to relate to, so he helped me pick out a third fabric with modern firetrucks I used for the center of the majority of the stars.

Now I'll just have to clean up the studio, waiting for that fabric to arrive.
Posted by Cheryl K. at 10:51 AM

Good one Cheryl. I'm still going too and fro on which two fabrics to use for the 7 Sisters. And I don't have your history to help me. Kason's quilt is looking good too.