Premier quilt historian Barbara Brackman has just launched a Block of the Week blog to commemorate the 150th anniversary of the Civil War. She's accompanying the blocks with photos and facts from the era. I was thinking about making the blocks when Dorry launched the idea to the International Round Robin group, and that pushed me to the commitment.

Here's my first block, Catch Me If You Can - 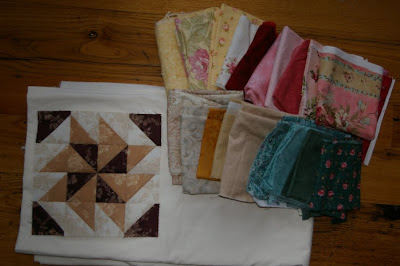 I didn't want to buy any new fabrics and have only a few in the Civil War Reproduction-category (and those only for use making blocks for other quilters who love them.) This project will use other lovely fabrics collected over years of quilting that have not necessarily made it into a quilt.
Posted by Cheryl K. at 5:21 PM