Kason got his new quilt yesterday and immediately saw and appreciated the Jayhawks and Firetrucks. His mother told me yes, he does say, "Rock Chalk, Jayhawk." 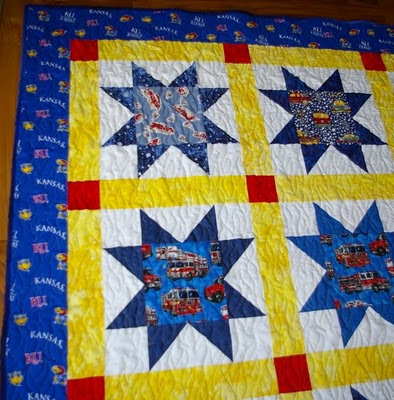 For those of my readers who have no idea about "Rock, Chalk, Jayhawk" it is a cheer of historic proportions. I read that U.S. president Theodore Roosevelt called it the greatest college chant he had ever heard. Wikipedia tells of Kansas troops using it during the War in the Philippines in 1899, the Boxer Rebellion, and during WWII. They also report that Albert I of Belgium asked for a typical American college yell at the 1920 Summer Olympics, and the gathered athletes supplied the KU chant. So the rest of us may be scratching our heads, but the KU fans are proud to say it.

I used a pantograph of flames for the quilting. Yes, one could freehand a design like this, but the pantograph made mindless work of getting even density over the entire surface. With the quilting uniform, there's nothing to distract from the fire trucks and the border print.

Click on this next picture to see the back and a little more detail of the flames. 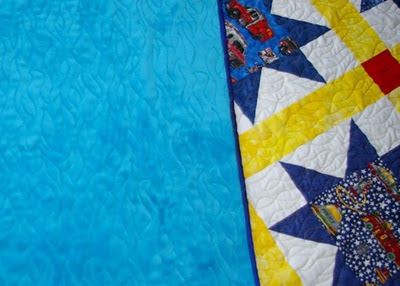 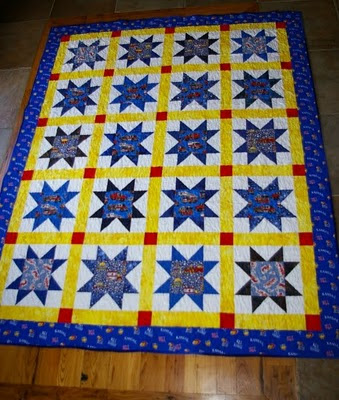 There's a slight ripple in the edge top and bottom - that would be caused by the natural stretch in the soft knit backing. However, Kason's parents told me he really loved his first baby blanket, a simple flannel print fabric I quilted to the same kind of soft knit. I'm guessing Kason won't complain about those edges.
Posted by Cheryl K. at 7:50 AM

How exciting, after all your hard work on this quilt, to have it so enthusiastically received. Well done!