How my Round Robin 7 quilt started

I've seen a couple of photos of my quilt top, which is still in New Zealand with Dorry. There are some delightful small elements I can see - and others I can't, so I still have some surprises to look forward to.

Here's the block I made to start it off: 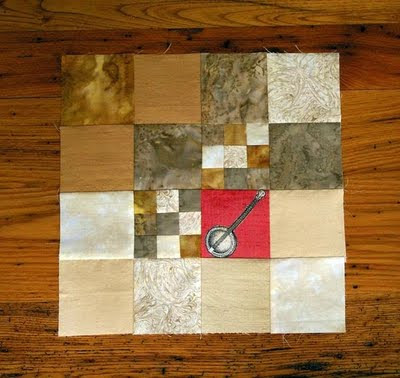 Instead of giving everyone the traditional fabric starting element, I opted to send them a swatch of virtual fabric. It was a portion of a photo of a small brown leaf isolated on a larger unidentified surface, taken by a local photographer. I took the leaf away so that what they were looking at was naturally textured misty brown and tan "fabric."

Then I asked them to do a very very simple block, using colors that could be found in the photo - except they were to use one smallish area to represent themselves in any way they chose, but it should be eye-catching. I called this concept "I Spy Checkerboard." I came up with it after looking at photos of old quilts at the Western North Carolina University's Mountain Heritage Center - viewable at the Quilt Index. One of the quilts there, made between 1945 and 1955 is called Checkerboard. You will not see much resemblance between that quilt and mine. The database notes that "Several blocks appear to have replacement patches" - and the way those replacements stand out from the quilt was what I asked my fellow Robins to replicate, when they were inserting a bit of themselves into my quilt. "I Spy" quilts are usually made for children, using a variety of novelty fabrics that the child can have fun identifying elements of.

For my block, I cut out a banjo from a novelty print and appliqued it on a silk fabric. I included a couple of shinier silks among my bland tan fabrics. To make it more interesting to piece, I made two small nine-patches out of random bits of the fabrics used in the larger squares.

You'll see photos of the well-traveled quilt when Norris brings it back from Northern Virginia.
Posted by Cheryl K. at 3:44 PM

Well, this is just a tease!!! Can't wait to see the whole thing! Do love the banjo!

Oh dear. I was hoping I had made a good resemblance to the original quilt...