My first Round Robin quilt

Anticipating the gathering of my Round Robin friends in Queenstown New Zealand next week, I wanted to show off the first quilt of mine made in collaboration with these quilters.

Round Robin quilts are traditionally made very differently from the method of this quilt. For this Round Robin, each of us started with a piece of art or photograph and cut it into 8 parts. I chose a photo of a beautiful iris growing outside our garage door. I doctored the photo a little to remove some distracting elements, resulting in this image as the starting point for the quilt. 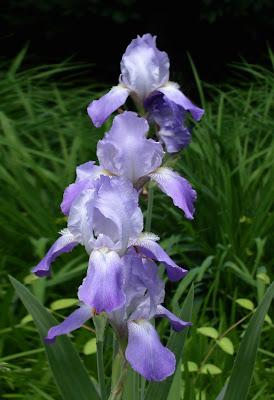 Each member received a piece of the photo about the size of a postcard. She enlarged her part 300% and used it to create a pattern. The participants created their "slices" in fabric and quilted them without the benefit of seeing the entire photograph - they simply created their slice in fabric.

And this is the quilt that resulted! 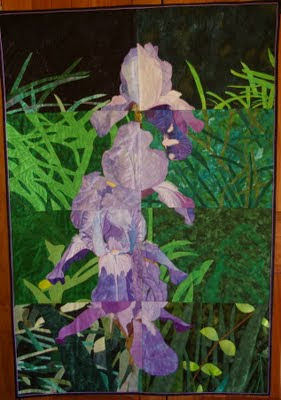 This photo doesn't do justice to all the beautiful details my Robin-friends put into their parts of my iris.

I started the process for this quilt by making the first slice shortly after the New Zealand Symposium in the Spring of 2005. I received all the parts two years later, and finished putting them together in January 2009.

This quilt was the result of Round Robin 5 for the group. Round Robin 6 was the lilies quilt I talked about recently. I'll post the story of my Round Robin 7 quilt in the next week.
Posted by Cheryl K. at 12:15 PM

The iris looks so realistic and so much like the photo. I have seen Judy's 'moth' in real life and it also looks fantastic. I've done one of these 'slashed' photo quilts before with a group and all the participants ended up with amazing art quilts.