A trip to New Zealand

After I had completed my part of Round Robin 7, I had lots of time to make a tote bag for Dorry who will be taking off for her native New Zealand tomorrow. She is hauling my part of the exchange, taking classes, seeing a quilt show, and shopping in addition to meeting with all the other members of the group. I thought a nice sturdy fabric bag could be useful to her there.

For this Round Robin, we were each to pick a "word." (I'll post about mine later, I didn't adhere strictly to the rules.) Dorry's word was South Pacific - so I made her bag to go with that theme.

For one side of the basket, I used a New Zealand pattern for a quilted pocket - the bright blue bird is a Pukeko. Dorry's sister Kerry sent me the pattern. It's very different from what I usually do, so I stuck fairly closely to the designer's color scheme. 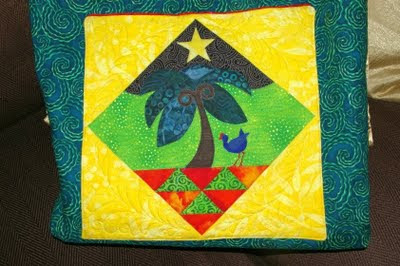 For the other side, I quilted a traditional block using a native NZ fabric (the blue stripe with Koru curls) as well as fabrics I had that had spiral motifs. 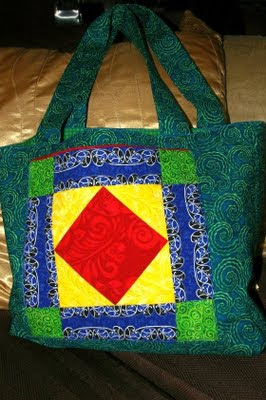 The inside of the bag has additional pockets. Norris took it to Dorry on his last business trip. Inside, loosely wrapped in tissue paper, were the quilt top I put together for Dorry, and the journal of everyone's contributions. Dorry will have to get these items through international customs but they are supposed to be a surprise, so I didn't think it would be wise to seal them in real wrapping paper.

I hope Dorry likes the surprise - at least she seemed to like the bag!
Posted by Cheryl K. at 3:26 PM

Oh Cheryl! what a lovely bag!!!! I look forward to seeing it in person - and the quilt top you have made for Dorry. She is a lucky lady!