My contribution to Round Robin 7

Just received word the Round Robin Reveal took place in New Zealand not long ago - Tuesday night, their time. So now I can post photos of my part during the last two years. The biggest project for me was putting Dorry's quilt together at the end (last fall). She chose South Pacific for her theme and began with a beautiful appliqued Tiki Man. Other members of the group used other native Maori designs, and included flora and fauna and scenes of New Zealand. Dorry's sister, who is one of the original members, made three blocks, and had an idea to include an interpretation of the Fish and Chips shop Dorry likes to stop at on every trip home. That gave me an idea about how to put all the blocks together in a spiral, starting with the Tiki Man at the center. 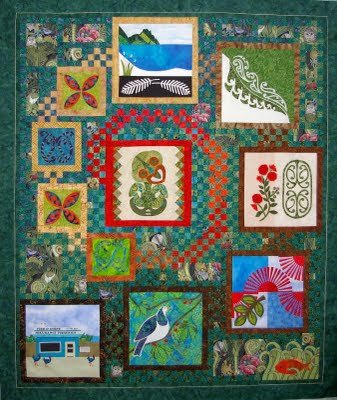 (if you click on this photo, then click again, you should get a much higher resolution version that you can see details in.)

Another element of this project is contributing to a journal that goes to the owner with the quilt. For the journal, we have taken to photographing our piece of the quilt in various scenes appropriate to the subject, or showing it in a setting unique to our part of the world, in a take off on the Flat Stanley concept. My part of Dorry's quilt (besides putting the blocks together into a whole quilt top) was the fish in the lower right hand corner. When I completed the applique, I put it on the floor and sure enough, Lu showed up. I did some photo-magic tricks to move him to a South Pacific beach, looking very possessive of his Catch of the Day. 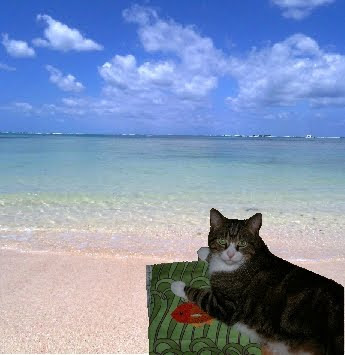