My contribution to Round Robin 7 - smaller parts

I have already written about the South Pacific quilt top I put together for Dorry. It includes the work of all the members of the group. Here I have just the blocks I made for everyone else.

Rhonda chose "Handbags" and made four delightful 6 inch blocks for her quilt, one of which had some fancy shoes. In September 2009, I got to make blocks for her. Even though I only ever carry a plain leather bag, I used some quilting fantasy to make hers pretty. She gave us the fabrics on the left to use as models for the backgrounds. 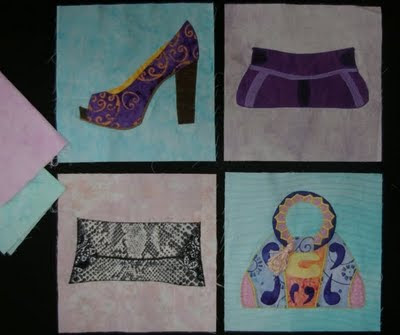 Next for me was Kerry's Baking quilt. She made a quilt block reproduction of a baking powder label from her childhood that reminded her of her mother's baking. In November, 2009, I made her a pair of mid-century styled aprons. Some of the fabrics I used were in the same line as the ones she supplied, but I had fun finding something I could use to decorate the wall of Kerry's miniature kitchen. I used apron patterns from the era - one of the patterns included an appliqued chicken in a pot, so I had to do that. Happily, Dorry had some novelty fabrics with perfectly-sized and colored chickens for me to cut out. 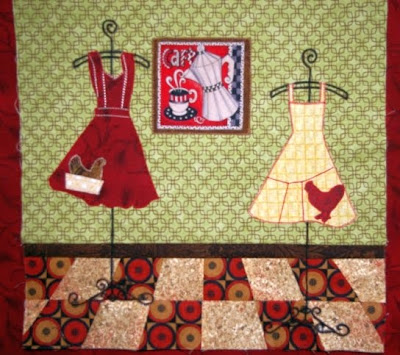 I was slated to make a block for Judy's Virginia quilt in February, 2010, the month after my mother's funeral. Judy had made a beautifully appliqued Rose block. She gave us a green shot cotton to use. I had more trouble than usual coming up with a design this time, and I'm sure it had nothing to do with Judy's straightforward theme. I had the book Judy used for inspiration, a collection of historic quilts of Virginia, and finally decided on one of the blocks from those quilts. It was a relief to me that it came out well and I didn't have that kind of creative block again. 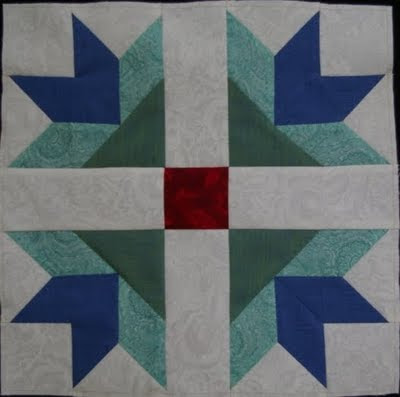 Heather's quilt was to be Spikey. She supplied us with three wild floral fabrics, and made a pair of circular blocks. I designed my own spikey-circular block and used all the fabrics she gave us for the center. I couldn't decide which of the black and white fabrics to use for the outer ring, so I used three of them, then threw in a green and white one I liked. All piecing, no applique for this block. 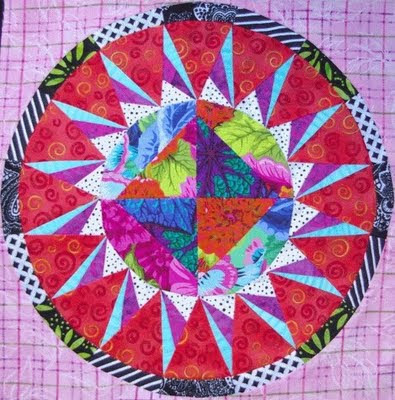 Because applique and embroidery are not my strong suits, I was a little fearful of the detail I was going to have to do for Jo's Butterfly quilt. Jo supplied two green fabrics for us, and she used them in a pieced background for her block. She asked us to use butterflies from our native areas so I chose the Appalachian Tiger Swallowtail - a butterfly I didn't even know about until I did my internet research. It looks like the Eastern Tiger Swallowtail, but is almost twice as large. I used photographs of our mountains my sister-in-law Joanna had taken in addition to Jo's fabrics for the background, and I was very happy with my machine appliqued and embroidered result, finished in June 2010. 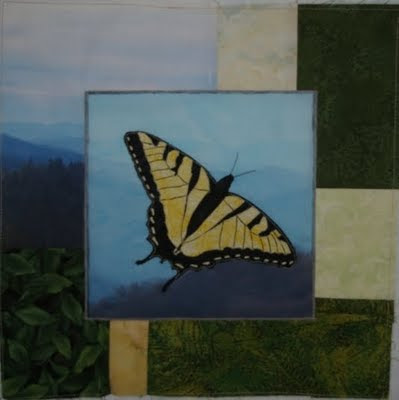 I'll post and describe my own block next week. I have seen photos of everyone else's finished quilts but my own is to be a surprise. Dorry will bring it back from New Zealand and Norris will be picking it up from her in Virginia in two weeks when he has to be in her area for a business meeting.
Posted by Cheryl K. at 8:30 AM

They are all great, but I Love the baking quilt!!